this is my blog. this is the only blog there will be.

Burning Man was so incredible. I was very close to not going, but once I was there I realized how inevitable it was that I attend. Cosmo, one of the most amazing of the people I met there, said that the second is strong in Black Rock City; knowing for someone 5 days in the desert is equivalent to 9 months in the default world. When old Jason came back from Burning Man last year I was frustrated with his inability to explain what it was like (as well as for other reasons) but now I understand that there’s no way to communicate that experience unless you are actually there. And once you are there, you will have a completely different story than I did but you will understand.

But there is one event that sticks out in my memory. I’ve told this story but I know it’s impossible to really tell. It was magical, unbelievable, and inevitable all at once. 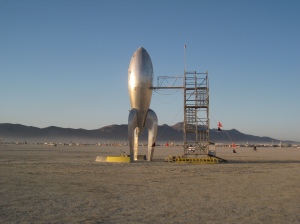 On Tuesday I met a man named Jason (not to be confused with old Jason). Wednesday night we ran into each other again, which is pretty amazing considering we were in the desert with 41,000 people all having a party, so to make a long story short after that we stuck together. Thursday night we rode in his art car to the Raygun Gothic Rocket, which after waiting in line and climbing up a ladder you could explore. Jason went up first while I had some deep soul sharing with his friend Rick. By the time we got up Jason had finished and gone back into the dark desert. I noticed one of the flight crew struggling with his flashlight, so I offered to hold it while he prepared a mini rocket to fire. After explaining the process, he asked me to launch the rocket. After years of temptation, I finally had an opportunity to push that red button labeled “DO NOT TOUCH.” With much gusto, I made the most of it.

After launching my rocket into what I supposed was oblivion, I climbed down the stairs and found Jason with his crew. They were all talking about the fact that Jason had caught the rocket mid-air and that he was the first person to do this. I couldn’t believe it–I thought it was pretty cool that I had launched the rocket, and it was great that he was the only person to catch a rocket, but it was pretty amazing that he had caught MY rocket… and then gave it to his ex-girlfriend so that she could skip the line for the rocket. Jason described it as “a great focus for entropy. I don’t know what it all means, but it’s certainly got me thinking.”

6 Responses to “The Rocket”